Period pains are a hugely common problem with over half of all women suffering from them each and every month! If you have sensitive skin like us, hot water bottles, heated skin patches and other solutions can be too irritating and actually aggravate the skin, so what to do? Our founder, Carolina got to try the Livia for period pain; a device that is the first scientifically-proven, wearable solution for period pain relief.

Below, Carolina shares her thoughts and reflections after trying out the device for over 3 months. This is our Livia period pain review.

I had heard about the Livia for period pain for some time and it had always interested me. However, to be honest, as someone who suffers from often excruciating pain that either results in succumbing to Ibuprofen, vomiting or staying in bed, I was sceptical about this device. I really wanted to trial it over several months, as like with many other women, not every month is the same.

How does my Livia work?

The device works through their patented technology; this essentially uses micro-pulses to interact with your nerves and prevent the menstrual pain from being felt. It also allows you to have complete control over the strength of the pulse, with up and down settings depending on how bad your pain is.

If you have ever used a TENS machine, Livia works off the same technology that is often used for muscle pain and sports injuries. The main difference is Livia has created pulses that work in a very specific way to alleviate period pain.

Are there any Side Effects of using Livia for Period Pain?

My Livia is completely side-effect-free, which is amazing, but if you have a pacemaker you are not able to use it due to the pulses. The Livia device is FDA Approved in the USA and CE certified.

How to use My Livia?

Very simply! The little device has a small clip that you can clip onto jeans, a pocket, or underwear and two gel pads that you put on either side of your lower abdominal or back. Then, you press the power button to start increasing the strength! That’s it!

It starts working immediately and one charge can last for up to 15 hours.

How were the Results?

From the get-go, I found the Livia for period pain incredibly easy to understand and use. The device itself is really small and I have used it both at home, as well as out and about, with no one any wiser. It is very discreet and I have clipped the device onto the waistband of my jeans, a pocket and even my underwear without any problems.

I had previously read other Livia period pain reviews and some people mentioned that the pulsing provides a distracting sensation. However, in the 3 months that I have used the device, I have found it 100% less distracting than having normal period pains to contend with. The pulsing provides a tingling sensation, which, depending on the strength setting, can be almost undetectable.

I was keen to see how Livia would respond on the days of my worst cramps. It’s true that the stronger my period pains, the more I felt them and so, I increased the strength on my Livia. However, for all of my period pains, it really helped reduce what I would normally be feeling to a more manageable level. On the days where I felt more mild period pain, I can truly say that my Livia lessened my discomfort to a point where I had no pain, which is really quite incredible!

I liked that I didn’t have to carry around a bulky hot water bottle; constantly having to refill it and making my skin red and aggravated. Prior to using Livia, I would also often take Neurofen to help with my period pains, and a common side effect of Neurofen is rashes; again, not ideal for anyone suffering from sensitive skin.

I can safely say I now swear by the Livia for period pain and although it's not a silver bullet, it is pretty damn close.

Every brand and product featured on Carolina GMX make our editorial pages once a minimum of 70% of our sensitive-skin testers consider it worthy!

If you are interested in checking out some of our other sensitive skin posts you can find the latest here.

AS ALWAYS ALL OPINIONS ARE OUR OWN 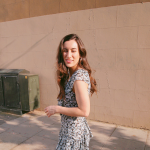 Carolina started CarolinaGMX after working in the fashion and beauty industries for over 7 years. This has included roles at Burberry, Selfridges & Estée Lauder. Her favourite product is Clinique’s Moisture Surge 72 Hours.